This tutorial shows you how to make Swiss Meringue Buttercream, which uses egg whites to make a silky smooth frosting with a light touch of sweetness. This frosting recipe is perfect for decorating cakes, cupcakes, and for filling macarons and other desserts! 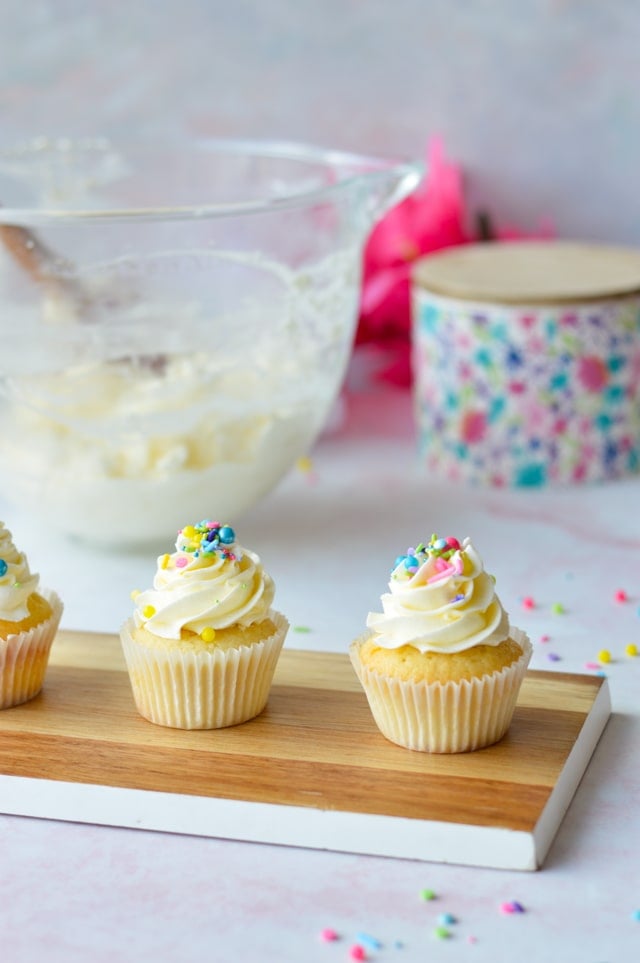 The difference between Swiss Meringue Buttercream and American Buttercream

Traditional or American buttercream is generally made from creamed butter or shortening and powdered sugar. It’s very sweet and can be a tad bit grainy.  It’s super simple to make, and great for cupcakes, kids birthday cakes, and is similar to what you’ll find in a grocery store bakery.

Swiss meringue buttercream, on the other hand, is very smooth and satiny. It uses egg whites to give it a smoother texture. It’s not grainy at all. It’s also much less sweet. This is the frosting that your  local patisserie or wedding cake shop is probably using.

It does have an extra step of heating egg whites over a double broiler that American buttercream does not.  Adding the egg whites helps stabilize the frosting for piping therefore Swiss meringue buttercream is often the preferred frosting for cake decorating.

Below is a picture of lemon American buttercream and lemon Swiss meringue buttercream side by side.  You can find my recipe for American lemon buttercream here. You can see below the difference in the two frosting: 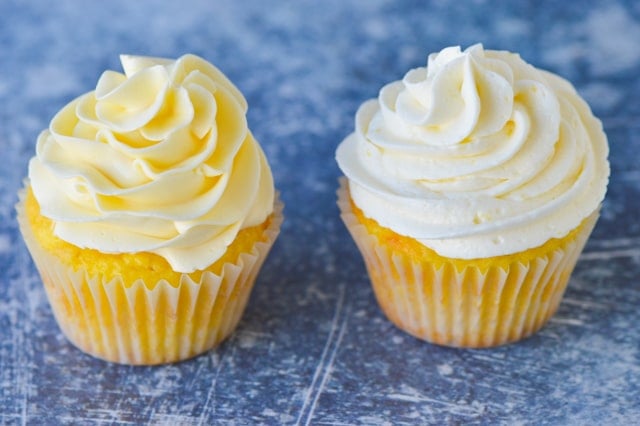 The Swiss Meringue buttercream is silky smooth and you can’t see any sugar while the American buttercream is light and fluffy.    Which one is better is up to you! It depends what type of frosting you prefer. Try them both out and see what you like!

There are so many ways to use buttercream. The most common is frosting and decorations for cakes and cupcakes.  But, you can also use as delicious filling for macarons and other sandwich cookies.

Using a double broiler or bain-marie is a lot easier than it sounds and you don’t need any special equipment.  As long as you have a small or medium sized cooking pot and a medium or large metal or heatproof bowl, you’re all set.  To use a double broiler, heat about an inch of water in the pot, put the metal bowl over it as shown below, and place over medium-low heat to simmer the water. 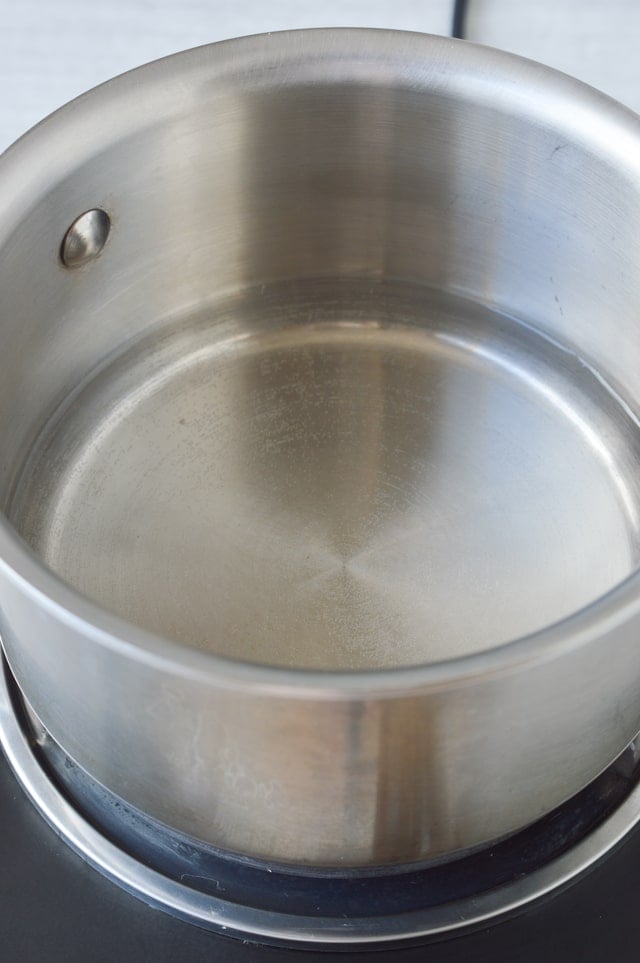 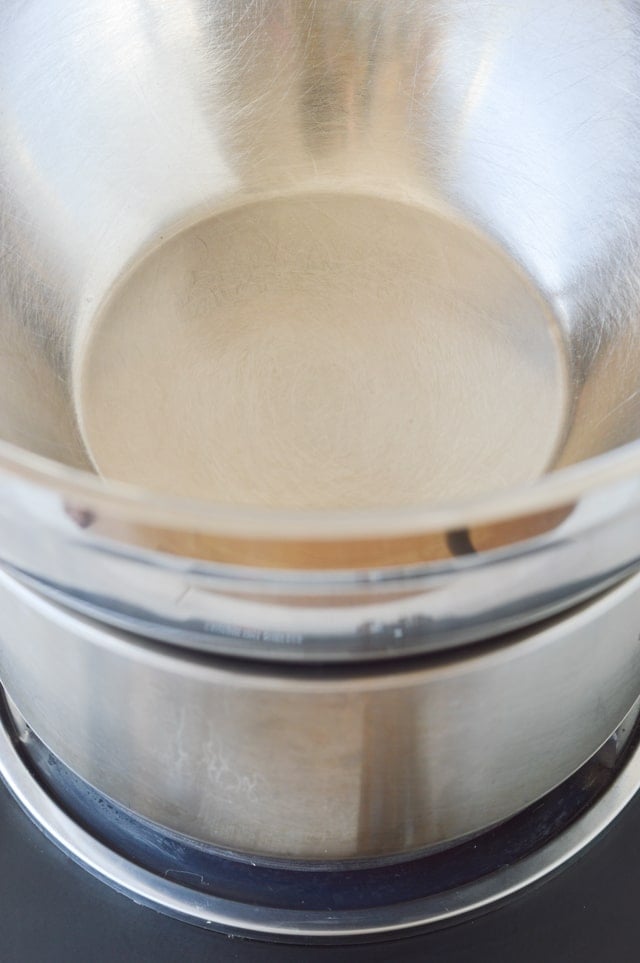 The water in the bottom of the pan creates steam to slowly and gently heat what is in the metal bowl. This method is very common for melting chocolate in addition to heating egg whites.    If you tried to heat either egg whites or chocolate directly on the stovetop, without the double broiler, you’d have scrambled egg whites and scorched chocolate because it gets too hot. 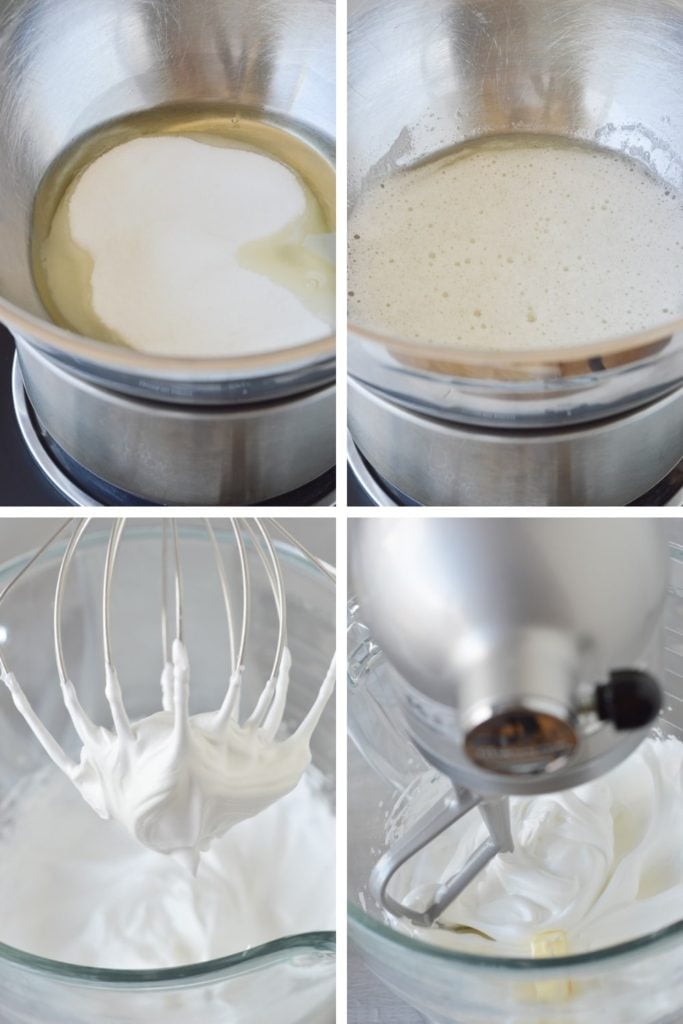 Sometimes when you start to add the butter the buttercream separates and looks curdled and thin or soupy.  Don’t fret! This is normal! It’s fairly common when you’re mixing the buttercream it will separate at some point. I remember the first time I made Swiss meringue buttercream  I actually threw it out thinking I made it wrong.  Only when I did some research did I realize I needed to keep mixing and it would eventually come together.  Here is what curdled buttercream looks like: 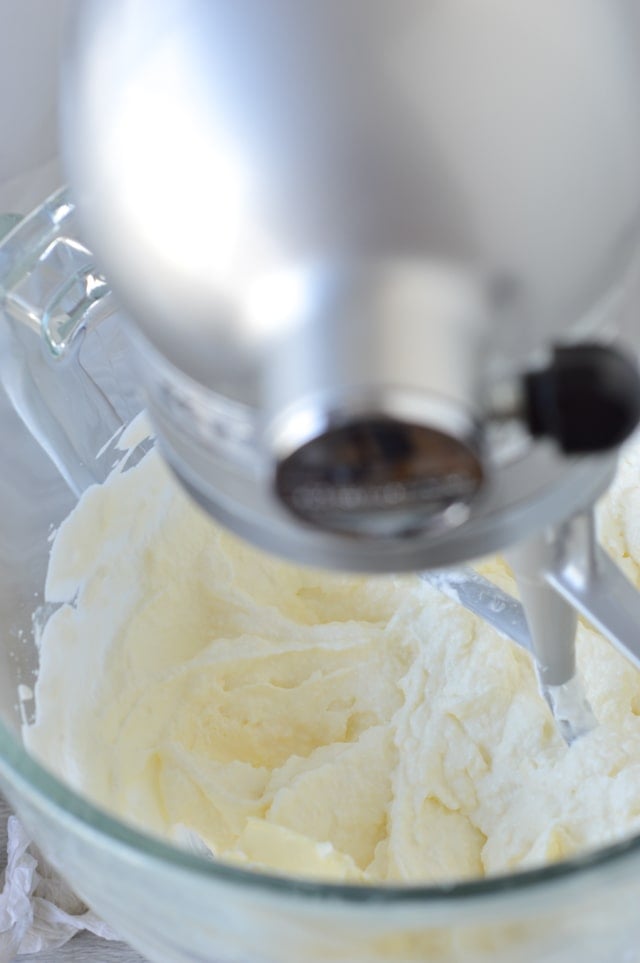 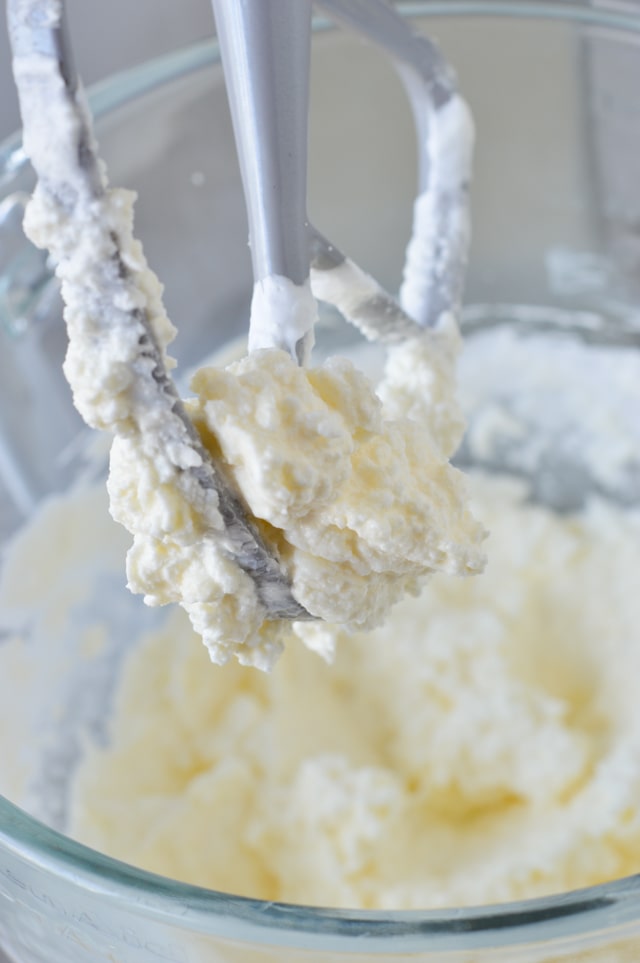 It won’t always separate, but if it does just keep mixing and eventually it will come together to a silky buttercream frosting.  If after mixing for a few minutes it doesn’t seem to come together, put in the fridge for 5-10 minutes to firm up, then remix. You can also try running some ice cubes around the outside of the bowl near the bottom. This works better with a metal bowl. Often this is enough to bring the buttercream back together without the wait time. 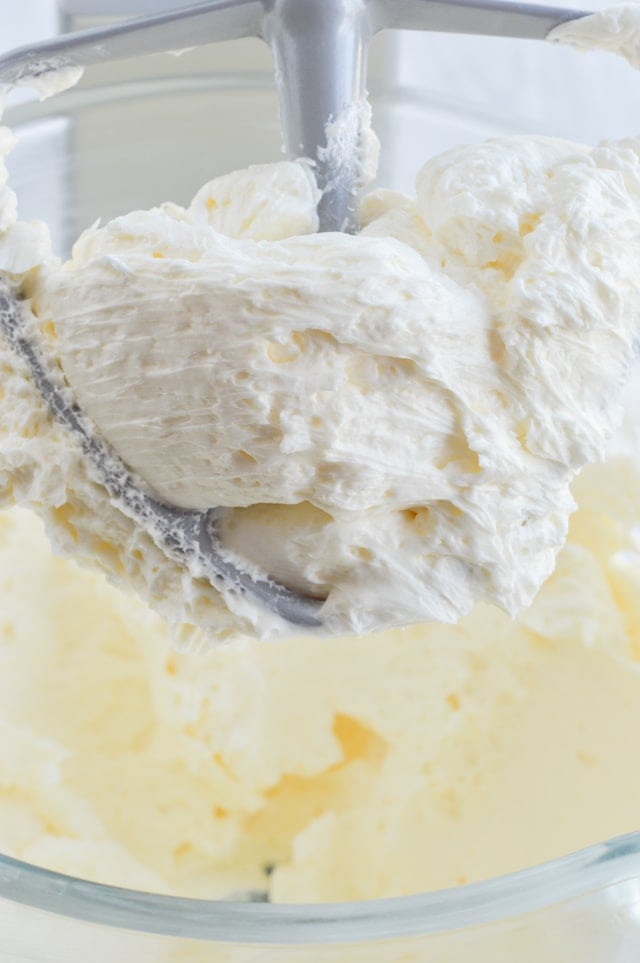 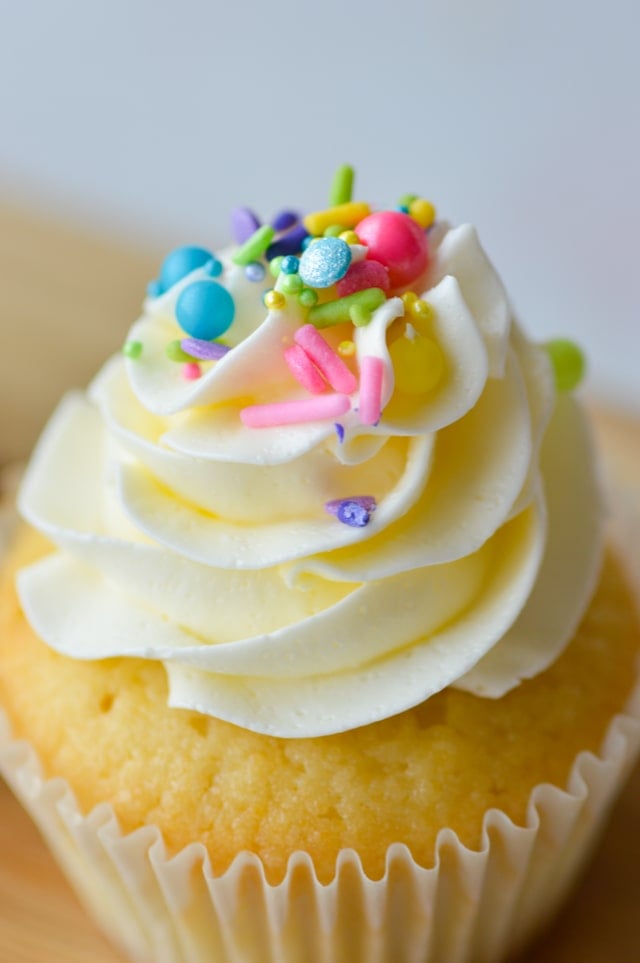 Buttercream is incredibly freezer friendly!  That means you can make this Swiss meringue buttercream well in advance to save time. Make sure you store it in an airtight container or in a freezer ziplock bag. The tighter it is wrapped the less likely it will take on any flavors from your freezer. Buttercream can last up to 3 months frozen. When you’re ready to use, defrost  in the fridge until complete thawed. Then, rewhip with a hand-held or standing mixer, and you’re ready to start frosting.

The flavor combinations for buttercream are pretty much endless! Here are two easy additions to change up the flavor of regular vanilla Swiss meringue buttercream. 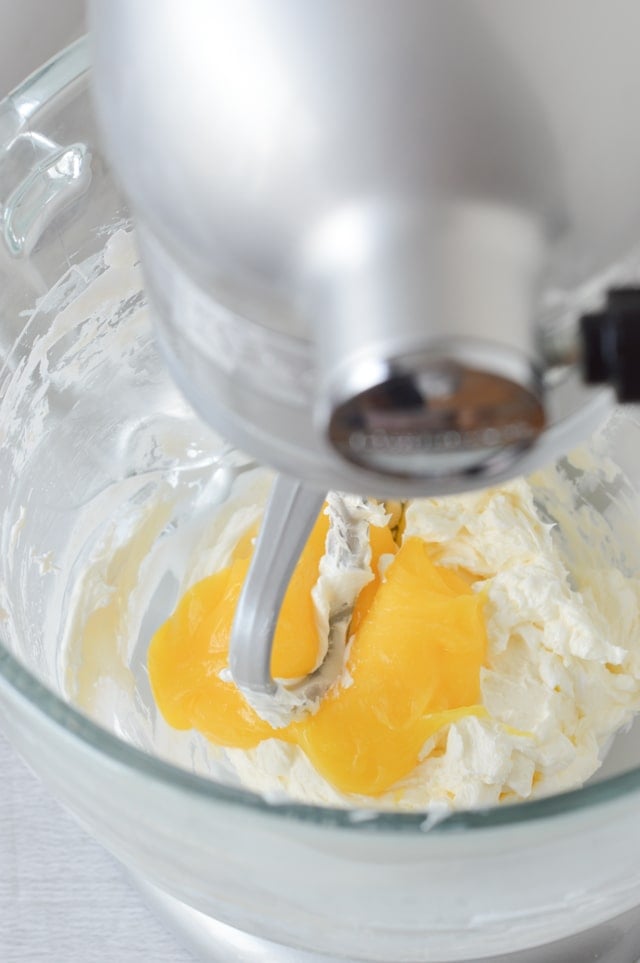 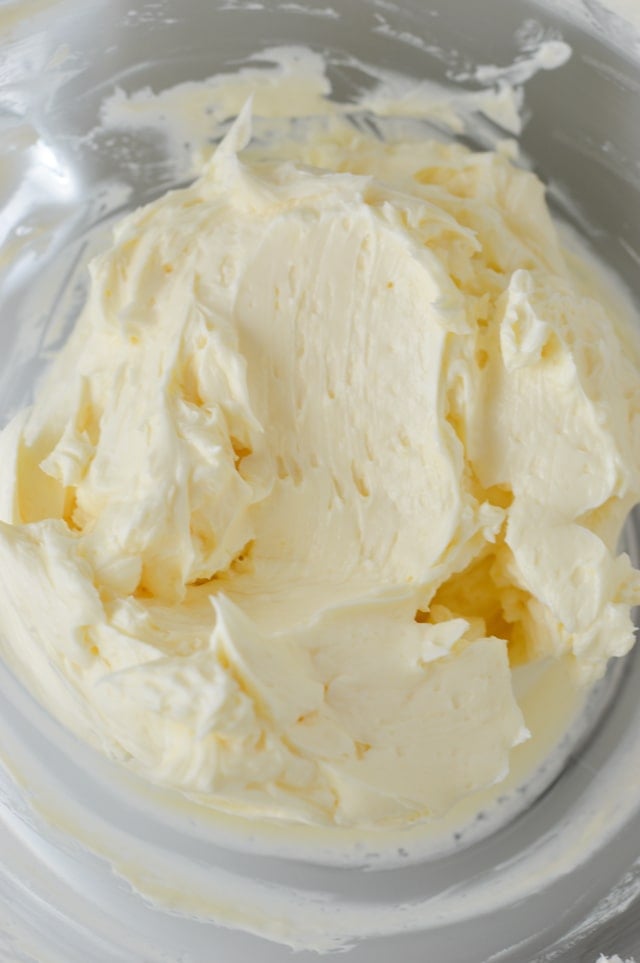 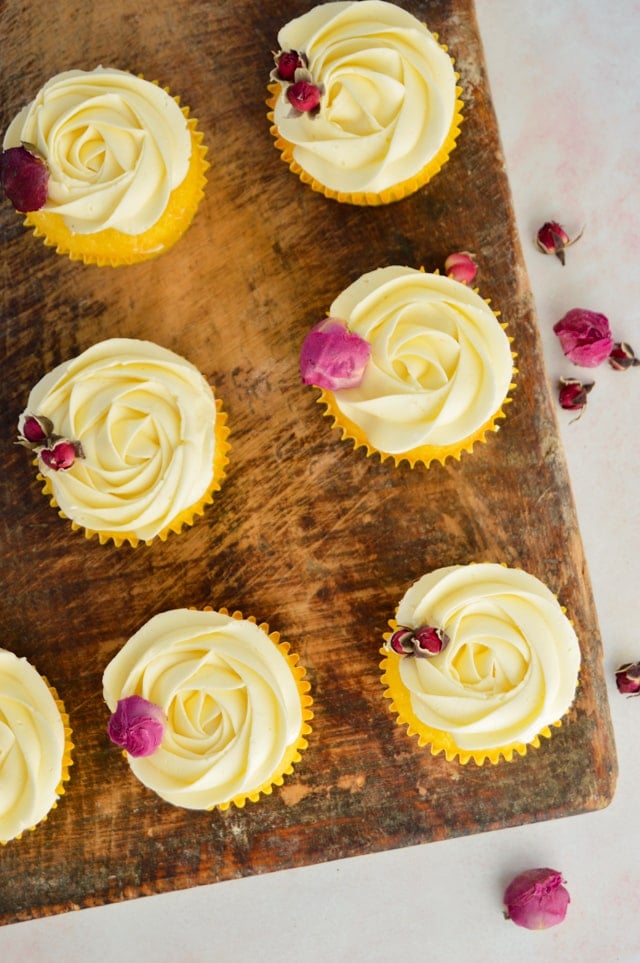 Whip into finished buttercream 6 oz melted and cooled chocolate (milk, dark, semi sweet, or bittersweet). Chocolate should be cooled to the touch (about 85-100°F) before adding it to the buttercream so it doesn’t melt the butter. 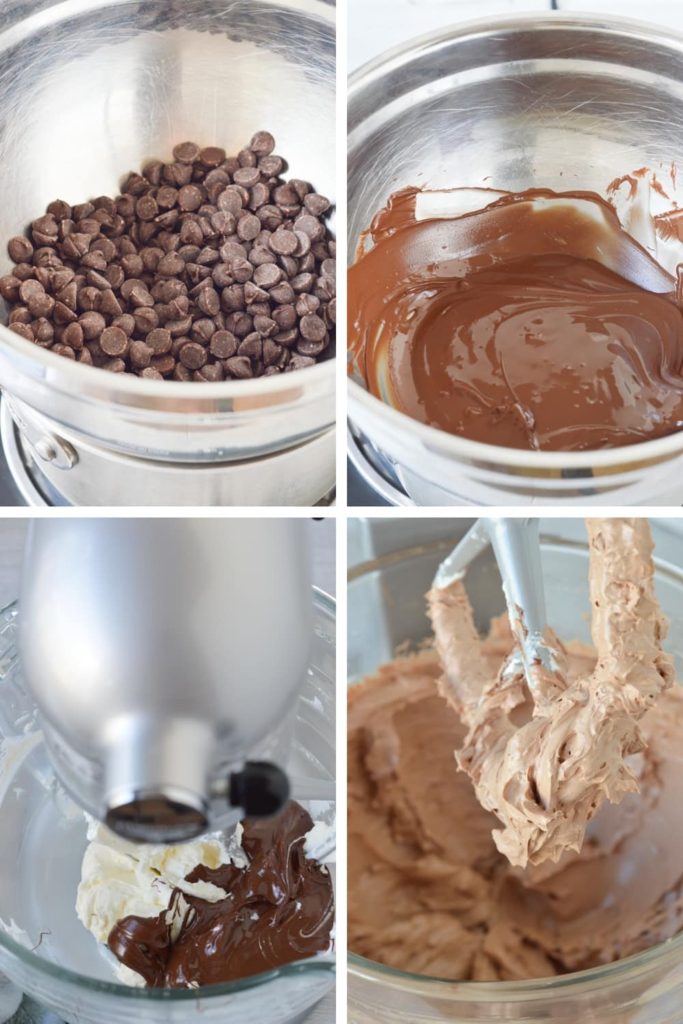 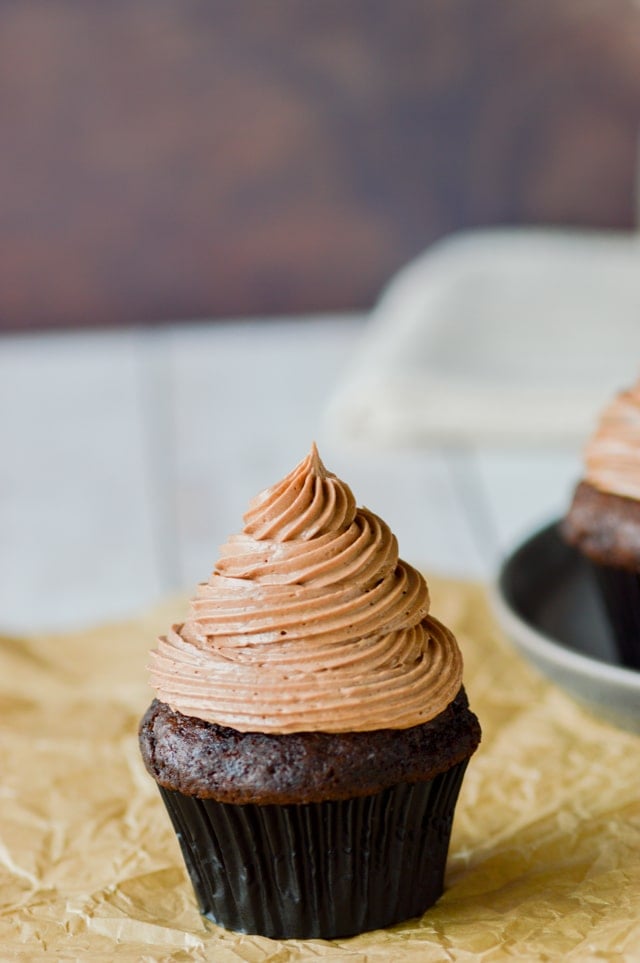 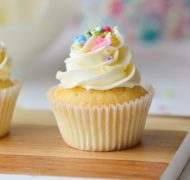 The sophisticated cousin to American buttercream, Swiss meringue buttercream uses egg whites make the frosting silky smooth with a light touch of sweetness. This buttercream recipe is perfect for decorating cakes, cupcakes, or to fill macarons and other desserts!

You can also make with pasteurized eggs, in which case skip the step of heating the mixture until 160 degree and go right into mixing the egg whites until stiff peaks and adding the softened butter.

Welcome to the Party!

I'm Sophia and thank you for visiting Partylicious! Focusing on dishes that will wow at your next party, my goal is to create food and drinks that are as beautiful and fun as they are delicious. Read More…

Get new recipes right to your inbox

DON'T MISS ALL THE LATEST!